1989. Video games were the primary fun to be had for kids under the age of 16, and I was 12 years old then… so that meant a lot of television, roller skating and of course Nintendo. Nintendo was everything. From Mario Bros. to Zelda these original Nintendo games were addictive 8bit masterpieces of beeps, boops, and electronic songs that never leave your mind.

Around that time, Fred Savage was being the adorable Kevin Arnold on the TV show, The Wonder Years, winning hearts all over tween land with his on again / off again romance with “Girl Next Door” Winnie Cooper. Being the highly marketable star that he was, he was quickly chosen to play the everyday kid in cult classic, The Princess Bride, as well as leads in Little Monsters and a massive Nintendo advertisement disguised as a film, called The Wizard.

Talk about product placement! The entire premise of the film revolves around a boy (Savage) and his little brother hitchhiking across the country so his little brother can play in a Nintendo Championship Tournament. Along the way, they meet an adorable girl with red hair played by Jenny Lewis. 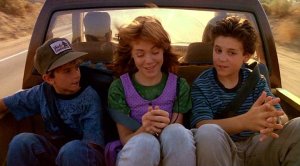 Please note the powerglove Savage sports in the poster!!!

Anyway, that little girl grew up to be just about one of the coolest ladies in music. Forming Rilo Kiley with fellow child actor Blake Sennett, she became a darling of the indie music scene when album. “More Adventurous” highlighted her vocals more so than previous Rilo Kiley studio recordings.

Since then, she recorded a solo album under Conor Oberst’s label, Team Love, with the Watson Twins as accompaniment. Personally this album, “Rabbit Fur Coat” is a favorite.

Jenny Lewis and the Watson Twins “Melt Your Heart”

Jenny Lewis and the Watson Twins and guest vocalist Ben Gibbard of Death Cab for Cutie and The Postal Service, “Handle Me with Care” (Originally recorded by The Traveling Wilbury’s)

Over the years Lewis has launched additional solo albums, and provided guest vocals on a variety of projects, even touring with the Postal Service on their last tour. I was lucky enough to see that live and it was a highlight of my year to see them sing together.

Her new album, The Voyager touches on topics once again relevant to my life.. I like that I have grown up with Jenny Lewis, and her films and music have sort of laid out a soundtrack to my own experiences and situations. She never shies away from writing lyrics that cut right to the internal struggle of women, and doesn’t make apologies or try to make it pretty all the time… sometimes life is hard, and I’m glad I can listen to these songs and see someone else has been through some of the same situations I have. I think Jenny Lewis is cool as hell, and if she can do it, so can all of us.

Here are a few videos from the new album:

Jenny Lewis “Just one of the Guys”

Jenny Lewis “She’s Not Me”

Lewis has always seemed very approachable to me. She comes across as someone I would hang out with, drink a Jameson, and talk about old Nirvana recordings. I was lucky enough to meet her at a show at the Troubadour for the band The Like.

She chatted with my friend and I and we decided we were going to bring back our favorite 90s fashion statement, Dr. Martens. …well Jenny…. We did it.